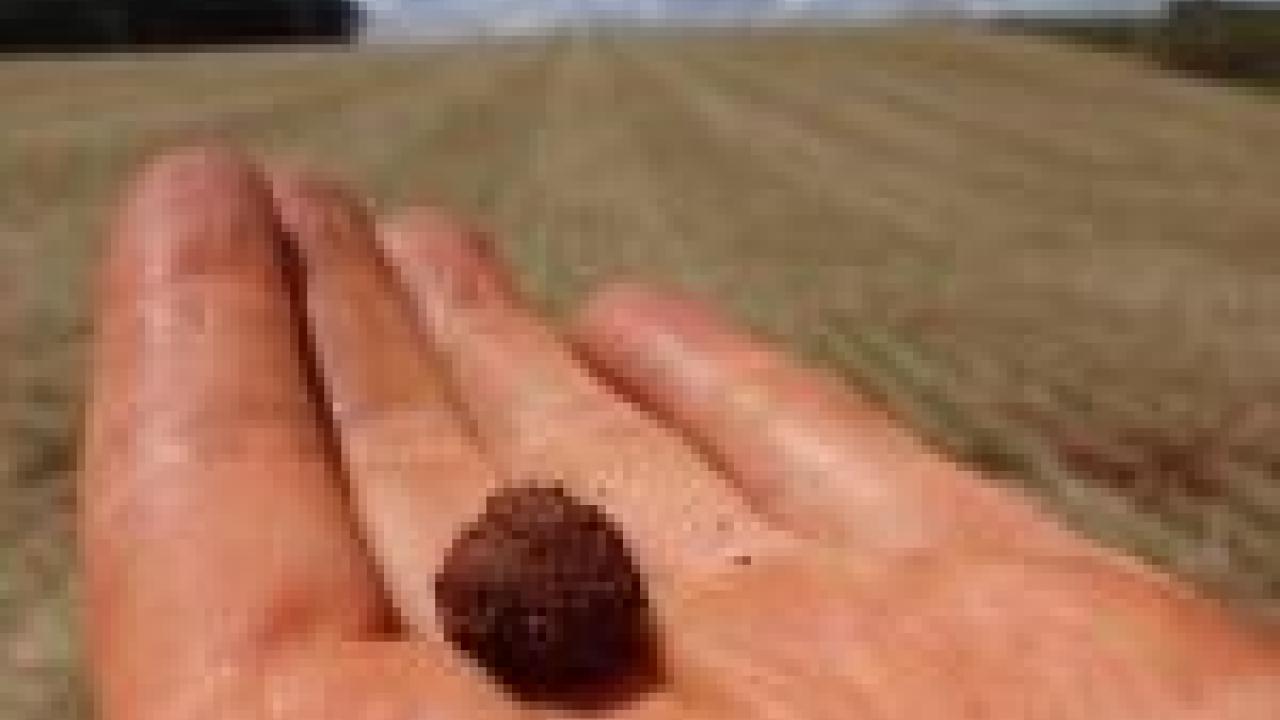 #2 Great balls of dung, and other surprises

When Augusto showed me the kumquat-sized ball of dried manure, I gave a gasp of delight much like the one I make when someone hands me a plate of chocolate-chip cookies. I took it from him and rolled it around in my palm to better appreciate a masterful example of excremental architecture. This little poop souvenir was exactly what I had come here for.

No, I wasn’t in this far southern region of Brazil to study dung beetles, nor anything remotely like them. But what I really meant was that this humble insect was the perfect embodiment of the theme behind my PhD dissertation: that the component parts of diverse, multi-faceted ecosystems tend to interact in fascinating, sometimes beneficial, and often unexpected ways.

As Augusto explained to me that day, the dung beetle plays a special and often overlooked role in grazed pastures: they take the nitrogen and carbon in cow dung from the soil surface and redistribute it to deeper soil layers, all while creating networks of tiny tunnels that aerate the soil and facilitate water infiltration. Because cattle are the ones kindly providing the manure the beetles eat, the beetles go where cattle go.

Across six months at fazenda Espinilho, I immersed myself in the delightfully complex world of integrated crop-livestock systems. Espinilho is the site of a long-term experiment on these diversified agricultural production systems managed by the Grazing Ecology Research Group at the Federal University of Rio Grande do Sul, where Augusto was earning his Master’s degree, collaborators of the Gaudin Agroecology Lab at UC Davis. For 17+ years the experiment has tracked soil health, crop production, and animal and forage production in an annual rotation of summer soybeans with winter rye/oat pastures grazed by beef steers.

The fazenda is unique because it demonstrates a kind of de-specialization of agriculture not seen at that scale in many places outside of Brazil. Specialization in agriculture refers to the gradual winnowing of the number of commodities produced by an agricultural enterprise to just one, visible in modern landscapes of heavily intensive crop production – miles and miles of corn and soybeans – in some consolidated areas and intensive livestock production – concentrated feeding operations and large-scale dairies, for example – in others. While this evolution of our production systems has resulted in unprecedented gains in productivity, the costs to the environment and the resilience of agriculture have been huge.

And specialization is not only a characteristic of intensive systems, but also of extensive systems such as livestock grazing, which require much more land area for the production of relatively few tons of beef. In the 1980s, in response to massive conversion of native Cerrado, Pampa, and Amazon habitats to monocultures of soybean and extensive pasture systems, the Brazilian government began promoting the style of crop-livestock integration practiced at fazenda Espinilho. In Rio Grande do Sul state, the initiative largely took the form of cover crop grazing by beef cattle in no-till soybean systems.

Farmers in southern Brazil often sow winter rye cover crops to prevent soil erosion and supply the residue cover needed to suppress weeds for no-till management. Those cover crops represent a vast unexploited resource – why not use them for animal forage at a time of year when high-quality grazing can be hard to find? Theoretically, doing so would double the number of agricultural commodities produced on a unit of land while relieving pressure for expansion of pastureland into sensitive native ecosystems.

As an ecologist, habitat conservation and land-use efficiency are not the only reasons this system is exciting to me. Grazing animals on land that was before exclusively dedicated to a single crop is the ecosystem equivalent of adding a whole new trophic level to an otherwise species-impoverished context. That extra layer of diversity caters to the kind of things we ecologist love to talk about: interactions, feedbacks, synergisms, resilience, food webs, and other ecological fundamentals that are all at least partly contingent on the presence of biological diversity. Adding a new trophic level adds a new agent of change, new sources and new pathways for fluxes of energy and nutrients. In other words, where there is diversity, there is the possibility of being surprised.

Now, back to those dung beetles. These critters are one such example of the unexpected interactions that make diversified systems tick. Their presence in the areas where cattle graze creates changes in the soil environment that carry over from pasture to cropping season. When the farmer applies lime to the fields to correct for high acidity, for example, the beetles’ crafty little storage tunnels allow the corrective lime to percolate deeper into the soil profile. For this reason, areas that had been grazed prior to soybean planting have more favorable soil chemistry during the soybean season compared to areas that had been planted to cover crops but left ungrazed. The “biopores,” as they are also known, also allow for better water infiltration and better root penetration into deeper layers of the soil, which might help soybeans in grazed areas tolerate hot or dry weather
better than soybeans in ungrazed areas.

There are many other interactions in integrated systems that impact ecosystem functions ranging from water and nutrient cycling to social and environmental services. During my summer at fazenda Espinilho, for example, I found that winter cover crop grazing uses up more soil water than when cover crops are left ungrazed, a deficit that carries over into the summer soybean season. This happens because cattle are constantly taking bites out of the grass, which responds by remobilizing stored energy resources to grow new shoots and replace dying root tissue. A single clump of ryegrass might have to repeat this process multiple times over the course of the winter, all the while photosynthesizing and transpiring tirelessly to try to reach maturity. The ungrazed cover crop, on the other hand, grows to its max height in the span of a few weeks, sets seed, and dies well before the grazed plants do – using considerably less water in the process.

The plot twist is that this apparent disadvantage of the diversified system actually has no impact on crop productivity. Soybeans in the grazed areas have consistently produced just as much grain – and sometimes more – as soybeans in the ungrazed areas Could this be the product of further interactions from grazing that make soil water more available to crops, even if there is less total water in the soil? This is just one of a flood of other questions I could ask about this system. And, like the dung beetle, one of the many ways in which it continues to surprise me.

Read more about soybean-beef cover crop grazing systems in these publications stemming from my PhD dissertation:

Read more about my exploits at fazenda Espinilho on my personal blog, Field Notes: Stories and observations from a wandering ecologist.

Caity Peterson (capeterson@ucdavis.edu) was a Master’s (International Agricultural Development) and PhD (Ecology) student in the Gaudin lab @ UC Davis from 2014-2019. She is currently a soil carbon specialist for Mad Agriculture and independent agroecology consultant in Denver, Colorado. Caity wishes to thank PCF Carvalho and the GPEP team for their friendship and collaboration on this research.

#10 Reflections on Progress: 50 Years Within One Family and Across Academia

#9 Case study: How to be the object and the researcher of your own experiences