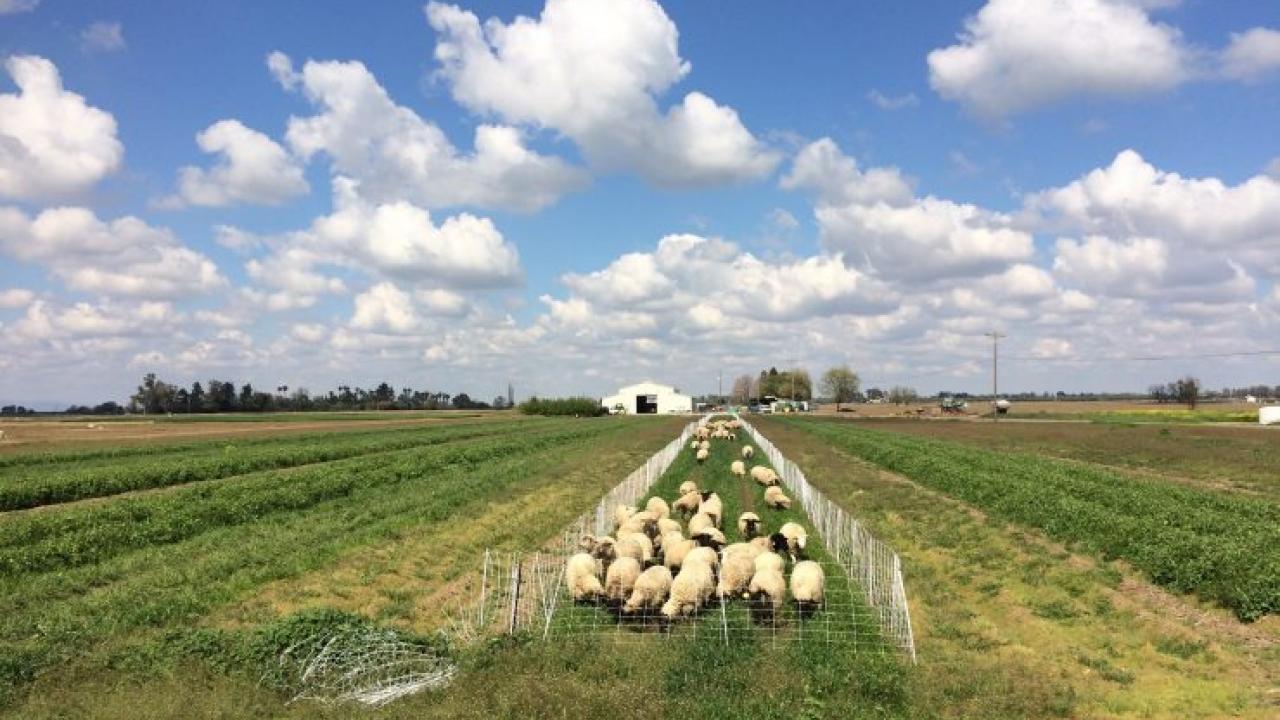 As I shifted the sheep from one grazed section of the field to the next luscious cover crop patch, they moved in threes, filling the width of the corridor.  They became more frantic to get to wherever the sheep in front was going, and the electric netting that formed the corridor leaned precariously on its side. What had seemed like a structurally sound enclosure was now looking very… open. I held my breath; all I could do was wait. The continuous and fluid-like nature of their motion convinced me there was no way a single, discrete sheep would deviate from the flock’s path. It was only when there was a slowdown in the flock, because the sheep in the new section started grazing, that I saw one sheep turn her head towards the pushed down fence. I could almost see her thought process “Huh, what’s over here? …looks pretty open… “. I turned to my lab mate, Alex, who was helping me, and our eyes widened. Luckily, the sheep noticed that the flock was in motion again, straightened her head and continued with the rest of the flock. Thank goodness for herd mentality! When all the sheep had moved over to the next section, the chaos subdued and we paused in a moment of stillness, appreciation and reflection. 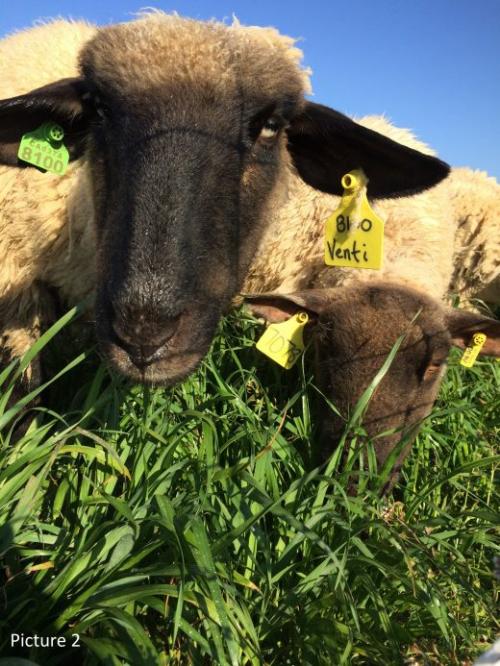 My field work this season has included two high-intensity, short-duration graze events at Russell Ranch Sustainable Agricultural Facility. I am investigating how sheep grazing of a winter cover crop- field  pea, annual ryegrass, and vetch- impacts soil carbon and nitrogen pools, subsequent tomato yield, and potential food safety issues with Nicole Tautges and Alda Pires. As of 2019, there were 235,000 acres of processing tomatoes in California, equal to about 3% of all cropland in the state. Tomato fields are typically left fallow throughout the winter months. Grazing a winter cover crop transforms a barren landscape into a productive, multipurpose agroecosystem. Grazing on land that would otherwise be unproductive increases the land use efficiency and productivity of a piece of land. With increasing development trends and more extreme weather events due to climate change, Californian farmers, ranchers and land managers need creativity in managing their agroecosystems; integrated crop-livestock systems could be a good tool for navigating such complex times. However, before recommending this practice, first we need data to understand how grazing impacts carbon and nitrogen pools in the soil. Carbon, the basis for organic matter in soil, is important for many soil properties such as water holding capacity and nutrient storage. Nitrogen is an important plant nutrient that can also be a pollutant if it is in excess (i.e. Nitrate pollution of groundwater). So, how does grazing impact carbon and nitrogen in the soil? The answer stems, quite literally, in the stems, or lack thereof! 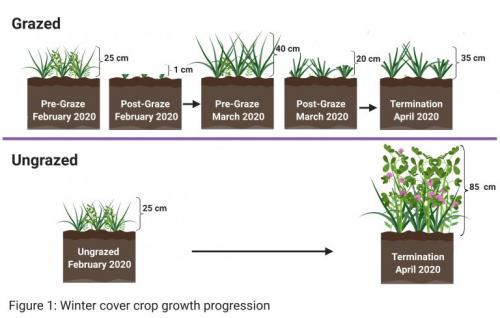 While the grazed and the ungrazed cover crop treatments began with the same seed mix in November 2019, by spring the differences were stark, in both above ground biomass and species composition (see Figure 1). During the first graze of the cover crop, there was a balance of ryegrass to legumes, that was essentially all consumed. By the time the second grazing event arrived, ryegrass had returned prolifically from the basal buds that regrew easily after the graze, but field peas and vetch were very sparse. When the sheep were first turned out into the field with ample grass forage this time, they first selectively ate the few peas and vetch that managed to regrow. The sheep’s own selective pressure had created the human equivalent to a scavenger hunt for sweets! The less intense second graze left behind about 20 cm of plant that regrew to 35 cm by the time the cover crop was terminated by tillage in April. Being out in the field to see these stem transformations was invaluable and my mind was always ruminating (pun intended) with new ideas and theories, in between setting up fence, moving sheep and supplying water.

Although the method of high-intensity, short-duration grazing can be quite hectic, especially on small research size plots, there are moments of calm that bring great joy. My little plot at Russell Ranch seemed to be teeming with all sorts of life. First of all, the sheep were absolutely jovial to be frolicking in the cover crop! Red winged blackbirds perched on the few tall, wild mustards that managed to take hold in the cover crop, a tall vantage point overlooking their domain. I spotted an owl soaring over the ungrazed cover crop during my “sheepover” one night. A pipevine swallowtail butterfly fluttered near the flowers of the ungrazed cover crop. Finally, while enjoying the sun on the last afternoon of the second graze, Alda pointed out a dog-like animal on the levee behind the field. It was only about 20 pounds and had a grey-reddish hue. Seeing this coyote was a grand culmination of my field season, and a great reminder about the many trophic levels that exist within an ecosystem. 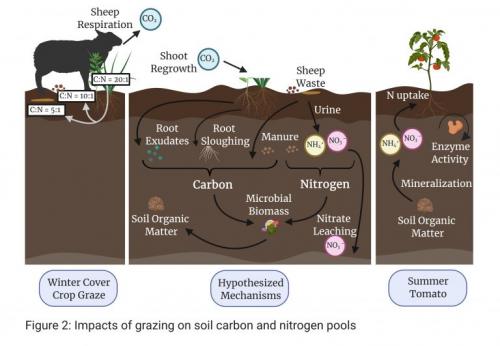 An additional benefit of fieldwork, beyond the beauty of working outside in a fascinating agroecosystem, is that it offers the opportunity to contextualize one’s work. Through the grazing process, carbon and nitrogen are converted from a ratio of about 20:1 in the above ground plant material to about 5:1 to 10:1 in the animal waste (see Figure 2). In the field, I saw all my theories playout, with the cover crop vanishing in a blink of an eye and the only remains being sheep manure strewn along the beds. This conversion to a lower C:N ratio represents the decoupling of the carbon and nitrogen cycles. What is the ultimate fate of this decoupling? Are the elements recoupled in the soil through the microbial biomass? If so, how long before this recoupling occurs? Or, does the decrease in C:N ratio of the plant matter lead to a loss of nitrogen from the system through leaching, before other carbon inputs, such as root exudates and root sloughing, can recouple with the nitrogen? If only I could get a microbe’s-eye view to see what actually happens! For now, lab tests on labile C and N pools will have to do. 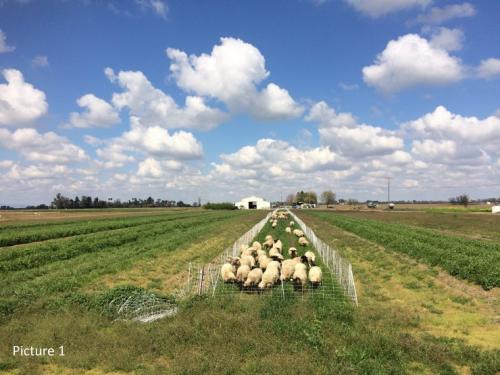 Some of my observations related more to animal husbandry. On the last day of the second graze, while walking back from observing the sheep from on top of the neighboring levee (and taking Picture 1), I took inventory of all the sheep. Suddenly, I noticed one sheep was rolled over on her back, her legs splayed towards the sky. Other sheep approached, giving her a sniff, as if to say, “What are you doing on your back?!” I looked at her ear tag: #7008. My mind started racing. I wondered how she could be bloating on this fresh ryegrass when during the first graze the forage had higher N content and the sheep were fine. I pulled out my phone and called Alda, who was further down the field and just out of yelling distance, “What do you think
Alda? Is it bloat?”. “Absolutely, but she is only bloating because she fell over into the furrow and can’t get up. That is gassy bloating, simply because she can’t burp.” Alda explained. “It’s easier to fix than frothy bloat, the type of bloat sheep get from eating forage that is too high in nitrogen.” Alda came over and hoisted #7008 up. The sheep immediately joined the rest of the flock and gave a brief burp. Suddenly, in the span of 30 minutes, the mortality of the sheep became very apparent to me. Recognizing the risks of grazing sheep on beds with (perilous) furrows is also an important consideration when land managers are considering implementing grazing and their frequency of checking their flock. These sheep really are dependent on us for food, water, shelter and the occasional flip upright.

Field work plays many important roles in a researcher’s career. It provides the context for an entire project, an escape from tedious lab work, and can even be a brief refuge from the deluge of worries in our current world. My second graze was in motion when Governor Gavin Newsom called for a state-wide shelter in place in California due to COVID-19. While practicing appropriate physical distancing, we managed to complete our final graze. As I reflect on those days that were only a few weeks ago, I am grateful for the moments of hard work, learning, appreciation, calm, and chaos. Now, I inhabit a smaller space and many things are up in the air. But through my fieldwork, I learned that I possess great resilience. Though the coming weeks and months will be difficult, I know that our community will also be resilient. In ecology, ecosystems can be viewed using a ball and basin model. Even if our society is forced into an alternate state, I am hopeful for how the system will be rearranged in the future. Perhaps this current pandemic will allow our system to adapt, improve and better respond to future events. In any case, for now I reflect fondly on my field season and bring up a picture of a happy sheep grazing whenever I need to bring a smile to my face.

#8 On finding emergent properties where I least expected them

#7 Mentorship: the secret weapon to combating inequities of higher education